Alzheimer's disease is a progressive, degenerative disease of the brain, which causes thinking and memory to become seriously impaired. It is the most common form of dementia, a general term for memory loss and other intellectual abilities serious enough to interfere with daily life.

The most common early symptom of Alzheimer's disease is difficulty remembering newly learned information. Other common symptoms: loss of memory, difficulty with day-to-day tasks and changes in mood and behaviour. These symptoms are often incorrectly dismissed as part of normal aging. It is important to consult a doctor when you notice any of these symptoms, as they may be due to such conditions as depression, drug interactions or an infection.

As the disease advances, symptoms also include confusion, irritability and aggression, mood swings, language breakdown, long-term memory loss and the general withdrawal of the sufferer as their senses decline.

The cause and progression of Alzheimer's disease are not yet well understood. Although the greatest known risk factor is increasing age, Alzheimer's disease is not a normal part of aging. The majority of people with Alzheimer disease are aged 65 and older. Researchers have learned that the disease affects both men and women, is not caused by hardening of the arteries and is not the result of stress.

Alzheimer's disease and related dementias are terminal, progressive and degenerative diseases that destroy brain cells. There currently is not a known cure for these diseases but studies show that lifestyle changes can help reduce the risk and slow the progression of the disease.

WHITBY, ONTARIO – Dementia, in its many forms, is a critical health-care issue in Canada that affects patients, families and caregivers in profound ways. 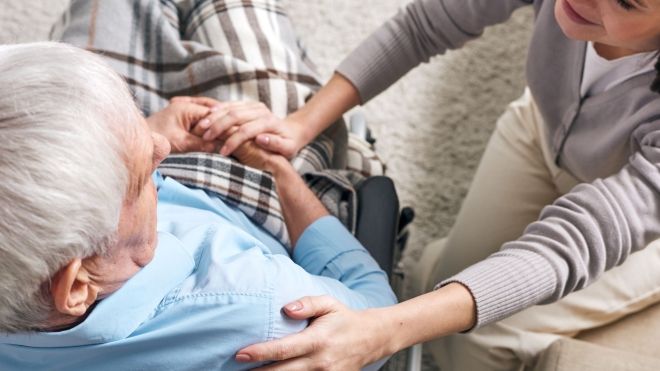 Tristan, a 4th year university student, aspires to be an occupational therapist.  He tries to balance his academic responsibilities with providing remote care for his frail 94-year-ol